Hello my #BMJers, what's the deal pickle is everything kosher? lol...We have been shutting social media down every Tuesday night since season 2 premiered. Woooohooo! I hear Season 3 is going to AWEsome, but let's not get ahead of ourselves.

Last week on episode 6, BKA #OhYesSheDid the topic of suicide was explored. For many years in the black community we considered suicide to be a "white thing," but it's not. There are so many people across socio-economic statuses, color, faith and gender who battle suicide, low self-esteem, depression and lack of self-confidence. This episode focused on suicide and black males, which was interesting and worthy of applause. In the height of Ferguson and other gun related violence towards our African-American males this episode was right on time.

I have always been the supportive type of sistah. While dating, I would support whatever project the boo was apart of, whether I was interested in it or not. But MJ, posed a great question while discussing the suicide issue with Sheldon, her new I hope to be beau, (we will discuss that subject momentarily); who will be there for the black woman? Not to say that the brothers don't need our support, but who will uplift the sistahs? Who will tell us that our hair is beautiful whether kinky, curly or loc'd? That our complexion -mocca, caramel,or berry black is rich and pairs well with bright and bold colors. That our curves are to be celebrated and the fullness of our lips kissed daily. Who will be there for the black woman?

I know one brother who wants to be there for MJ and that is David. David is really #TeamMaryJane right now. What's up with that? He is living with another woman and having a baby by her. Hello somebody! In season one we clearly thought that David moved on. But did he? I know this is just a show, but David and MJ situations happen all the time. My question is simple, if you love them why not just be with them? I just don't get it... It's complicated you may say. I don't believe love is that way. Love is free, simple, and easy. It gives what it receives. It's the things surrounding love that make it complicated, like: work and bills. But love, it's so simple.

Now back to Shaka, I mean Sheldon. I am really liking Sheldon for Mary Jane. He is intellectually astute, direct and sexy. Let's have a moment of silence for Sheldon's sexiness........... But seriously, Sheldon asked Mary Jane on a date and even told her that he would be out of the country for a couple of days. He communicates. YESSSSSS! He knows what he wants. YESSSSS! Well they did say he was 50+, I'm going to need Sheldon to know exactly what he wants at that age, you don't have much time buddy lol. But fellas, we want to be asked out on dates and not through text message either. Call us. We want to hear your sexy voice. Yes we do. We really do. When did calling become so prehistoric anyway???

Nevertheless, right after Sheldon asked MJ on a date, MJ goes back to David. Momma nooooooo. I won't lie, I was sooo disappointed. But that happens. MJ tried to close the door, but it was still open because David still had feelings for MJ. *sigh* Somebody pass me a box of tissue or the bible. I don't know if I should cry or pray, because I'm so confused lol. Does David only want MJ because she is moving on. Does her absence speak volumes? Do you miss MJ? Taking a sneak peek of this week's new episode I am led to believe that MJ possibly had sex with David to get back at him? We shall see..

A major s/o goes to Mara Akil and the cast of Being Mary Jane. Thank you for showing me much love this season. Appreciate you! Check out the love :)

Posted by Not Your Average Model at 8:53 PM No comments:

Hola! Great day peeps. I woke up this morning with so much faith and trust in God. I was on such a high, that I didn't even realize today marked my three year anniversary as a blogger. Wooohoooo! Somebody say "par-tay." Three years to date, I stepped out on faith and decided to turn my mess into a ministry, my pain into a platform and provide a source of empowerment for people everywhere.
Covering topics such as fashion, love, faith and events; I have been privileged to share my world with you all and I am thankful for your continued support. Through these three years, my confidence has been enriched, my desire to please God enhanced and my purpose enlightened.

I have learned many lessons (lifeSTYLE tips) in this period. At this time I am led to share these two: Trust God and be comfortable with being YOU.

Tip One - Trusting God simply means that you trust His timing and the plan He has for your life. Point blank!

Tip Two - Be comfortable with being you. This is so important because so many people are afraid of being themselves for lack of acceptance. You don't have to ask people permission to be who God created you to be! You had a purpose long before people knew you had a talent/gift. Stop explaining yourself. Who is LaShannon Petit, you might ask.? I am a lover of Christ, a purpose influencer, a lover of all things empowering, a source of information, an avid reader who likes rap/hip hop music and someone who loves to dance. I dance in the shower, while washing dishes, in the car, in the mall, no place is off limits. I think you get the point lol...

Now, who are you? I want you to take time out this week, month and year to discover the real you. Hurry the world is waiting.

Posted by Not Your Average Model at 10:11 AM No comments:

At the culmination of 2014 and the beginning of 2015 many of us set new year resolutions, affirmations and declarations. We examined our year, the ups, downs, aha moments and decided what we will and won't tolerate. Who we will allow in our lives and most importantly in our space. For me, in 2014, I charted into new territories and worked with some amazing people. I incurred some challenges, but through those challenges God strengthened my character and stirred some gifts. I decided that 2015 will be the year that I start living a limitless life, trusting God wholeheartedly.

Some might question, you're a christian LaShannon, shouldn't you already trust God? I should and I do, but not all of me. There are parts of me that still question, that over analyzes... situations, people, my current circumstances. But despite my need for clarification and attention from Him, He keeps proving over and over to me, that He has my best interest, He has my back and that He hears and understands me. Every cry, concern, doubt, fear, prayer, desire and plea all the way down to the thoughts that I have not voiced, He gets it! One of my favorite quotes by Oprah Winfrey is that," love is in the details" and it is! Last year I wanted to travel to the Bahamas for my Birthday, November 11, (Just in case you wanted a jumpstart on 2015 Birthday gifts lmbo), but it wasn't possible because I was working on a new project as a consultant and it was very demanding. Don't you know, before the year was over I was able to travel to the Bahamas as a guest of my clients. 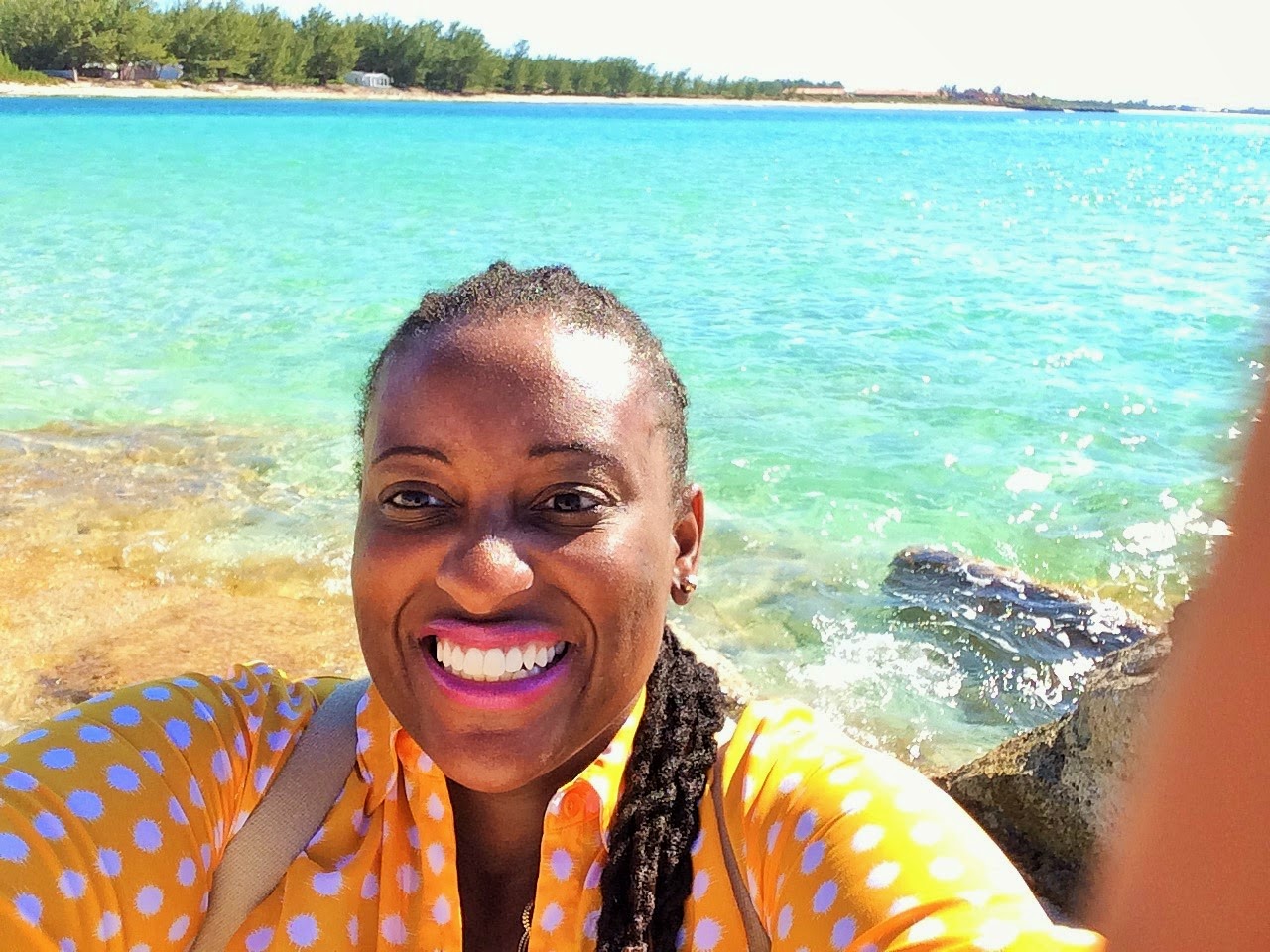 That was enough for me to say have several seats LaShannon, just let God have His way. All He wants to do is bless you. Jeremiah 29:11 states, "For I know the thoughts that I think toward you, saith the Lord, thoughts of peace, and not of evil. To give you an expected end." Moving forward, I decided that I'm not going to question the Lord. Just do what pleases Him and keep it moving!

Bishop T.D. Jakes New Year's Eve message was entitled A New Normal. Select the link to view https://www.youtube.com/watch?v=u-VdViSSV14. Simply meaning, creating a lifestyle that is not an answer to a quick fix, but a lifestyle change. A shift in your mind, habits, behavior, thoughts, patterns, this is not life as usual! This year I am approaching a new way of thinking in the areas of fitness, love, my business (www.stylingpurpose.com) and relationships and I implore you to do the same. What is your new normal?

On a more personal note, on December 23, 2014 I had surgery to remove pre-cancerous cells in my cervix. With much prayer and divine intervention, I am able to report that ALL of the pre-cancerous cells have been removed. #SHOUT I mentioned this to say that God is a healer. He has the power to rectify any and every situation that we encounter. Because of this situation, I was led to create an additional platform of encouragement with my blog, on #YouTube called #ModelBites, like soundbites, pretty dope hunh :). They are weekly words of encouragement for the people. If you missed the past two weeks here it goes.  Be sure to subscribe to the channel as well.
https://www.youtube.com/watch?v=Uw6AGYbgpRM