Last night my girlfriends and I enjoyed the Series Finale for BET's rom-com show, Being Mary Jane. 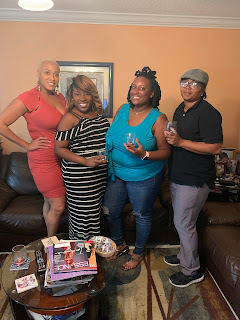 Davi, LaQuisha, myself and DJ

Accompanied with some wings and fine wine from V. Sattui (Nappy Valley) we discussed everything from love gained and lost, the importance of communication in a relationship, women's health issues and some other info that's not for public consumption. (touch your nose) I have been a loyal fan of this show since it's first tv appearance in 2013 and last night's conclusion was what we all wanted for MJ and honestly for ourselves. Someone to love us for who we are, baggage and all! With insecurities and faults, whether we prefer Jodeci over Boyz II Men or if a trip to Coldstone makes us happy. We just want to be seen by the person who we love and be one of their priorities.

I shared on the radio last week, that I feel different about my season of singleness this time around. I feel compelled to share my personal challenges and empower women to be encouraged in this area as well. As I'm saying this over the radio the tears started to flow and I am now on live radio and not to mention Instagram Live ugly crying. At first, I felt embarrassed and wondered where did all of these emotions come from, but what God showed me in that moment was that He was fully in control. Because who wants to cry over the air waves and on IG live. NOBODY! God showed me that He's doing the internal work in me to take me to the next level. I'm taking the pain from this process of singleness and turning it into purpose. If nothing else comes from me sharing my singleness journey, healing must take place.

Pauletta Patterson AKA Mary Jane Paul played by the oh so fabulous Gabrielle Union-Wade, resonates with so many women, because at one point in our lives we have been MJ, know someone like her or dated one of her many suitors: Lee, Dre or Beau.

As a believer, I celebrate Resurrection Sunday (Easter) and the season of lent. For lent this year I gave up being in control of what I thought should happen, who I thought it should happen with and when it should happen. Subsequently, what transpired on the radio last week was God illustrating to me that I finally let Him have full sovereignty over my life. I really let go! Yesssss. And it felt liberating!

Whether it’s a relationship, a state of mind or a bad habit, the Resurrection season symbolizes the end of a season and the fresh beginning of something new! Throughout this singleness season I have been asking God, "What are you already doing in my life in this area?"  I believe that God is preparing me for my mate. I understand that it is what you do in your waiting season that matters the most.

The Being Mary Jane series finale started where it left off on Season 4 with Justin proposing to MJ. MJ accepted his proposal, however in their break up time, which was only 48 hours MJ had artificial insemination. Mary Jane didn't give up on her desire to be a mother, because her relationship with Justin ended temporarily. After Justin's proposal MJ shared with him that she was pregnant and his response was unfavorable.

It only took 48 hours for MJ's life to change! I make reference to this point in the show because, it only takes a second for God to change your relationship status, zip code or bank account balance, and it may also only take 48 hours for you to meet someone who is ready for a commitment. And that is exactly what happened to MJ! Her ex college boo Beau came into the picture and helped MJ during her pregnancy and after giving birth to AJ. Your life shouldn't be on hold or stop because of someones unreadiness.

In the end Mary Jane got it all! Justin and MJ found their way back to each other and married. MJ did the internal work, didn't settle and was honest about what she wanted. However, did it take for Justin to see Mary Jane in a relationship with Beau for him to realize that he loved her and was now ready? Maybe fear was a factor, but love is so powerful that it overrides fear.

In the words of Mary Jane Paul, "Let go and let love. Because the second you get out of your own way and stop orchestrating, it just happens."
Posted by Not Your Average Model at 9:33 AM